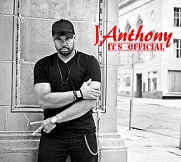 The combination of rock with funk and a bit of pop element often create an exciting fun stuff, which is what probably triggered Toledo based singer/songwriter, J-Anthony to unleash his debut single titled “It's Official”. An interesting piece of music which managed to blend in those three elements well enough, producing a track that can attract such wide range of fans from different genre. Despite being his first single, the Cleveland, Ohio born musician showcased his experience and quality by putting out such well arranged music that also possessed a quite catchy appeal.

Aside from the notably funk-rock style, “It's Official” also offer exciting guitar riffs, nice bass runs along with pretty simple lyrics. The story itself is nothing super complicated as it talks about a man's expression when he has found his love one and there's no shying out in telling about it to everyone. That simplicity approach could go along well with the current era as in today's music world, people seems to be more keen on checking out songs with crystal clear messages and not too much poetic words being thrown out.

Accompanying the song, J-Anthony also put up an official music video which can be streamed via the singer's official Youtube channel. Keeping the simplicity theme going, there's nothing complicated or too fancy regarding that clip, shot by Hogue Cinematics, as it basically combine Anthony's story with his girl along with him playing music with his band. Nevertheless, despite not being super extravagant, the video still correlate well with the song itself and is quite pleasing visually, since it's being shot in a rather documentary-drama kind of look. In all, it's a fitting representative over “It's Official” itself and doesn't do much wrong as part of promotional tool to further introduce that debut single into the music realm.

Being born from a musical family, things doesn't immediately fall into places for J-Anthony as he did experience being a college athlete and becoming high school principal. However, the Toledo's singer can't shut down his strong musical call and eventually decided to start his adventure in that realm. After successfully getting acknowledgment with his cover band project, Anthony finally found the right moment to release his debut single with “It's Official”. This track is certainly a well presented introduction of the musician's potential and quality into music lovers across the globe. Accompanied by his band, consisting of, Devin Krueger (lead guitar); Will Schuler (drums) and Byron Harris (bass/keys), J-Anthony hopefully can produce more exciting songs and full first album sometime soon.

More info about J-Anthony can be found in various social media under the initial @JAnthonydotcom.

Here is the official music video for J-Anthony's debut single “It's Official”: